What we’re doing in the studio…

You may well be wondering what we’re up to in the studio, well it’s not a new album, at least not quite yet. What we are in fact doing is a whole bunch of stuff for an uber special 40th Anniversary special limited edition commemorative “audio book” .

I managed to get the old multitrack tapes of The World album onto our new Pro Tools system so we are re recording the drums with Vinnie and we’re going to do the same with Men Who Climb Mountains and will totally remix these two albums along with 2 live cds from the forthcoming dates in November. (London, Holland and Switzerland)

For these live shows we want to play and record some of the more unusual Pendragon material like Sister Bluebird, I Walk The Rope, Fly High Fall Far, Queen Of Hearts, as well as some of the longstanding favourites. We hope to get a few of the founder members of the band back for a song or two on stage as well for some extremely early material you probably didn’t even know existed!
An audio book, in case you didn’t know is a hardback book a bit smaller that an Lp and we’re getting Simon Williams back in to do a huge new full colour illustration for this special release. As the audio book is a decent size you’ll be able to actually enjoy the artwork and book in all its glory . The book will contain 30 pages of photos and artwork  over the past 40 years.
Yesterday Vinnie finished the drums on The World and it sounds fantastic! 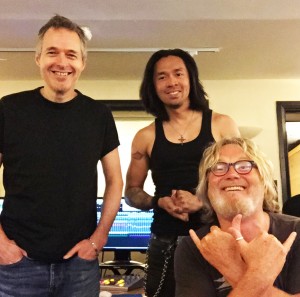